Long distance test and review of the Xplore L

Posted on 03 August 2012
Posted by Admin
Review of Xplore

When we were getting ready for this journey I was told that circumnavigation of Britain will put a boat through the same stress as ten years of normal usage. Obviously we started to look for the best possible kayaks. 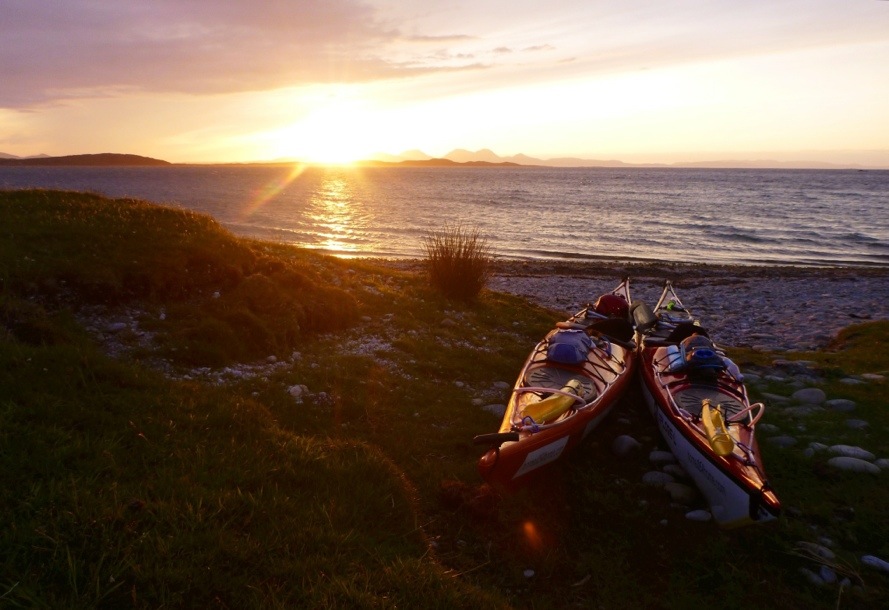 I made a list of what to look for on an expedition boat.

COMFORT/BOAT CONTROL
We knew it was going to take us four months to paddle around the British coast and we would spend long hours in the boat, often without breaks. We were looking for a really comfy kayaks but at the same we wanted to have a full control over them. Basically this one was all about cockpit.

VOLUME
We were not looking for a big kayaks. Ideally we wanted small kayaks with huge amount of space in the hatches.

STRENGTH
For obvious reasons we wanted the strongest and the toughest kayaks.

PERFORMANCE
British waters offer all conditions one can imagine so we were looking for boats which can handle everything. 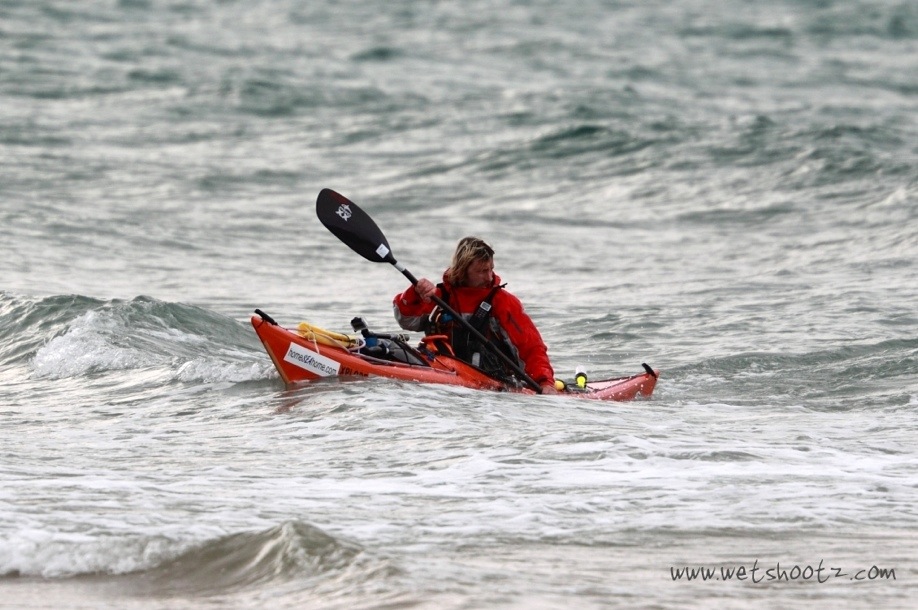 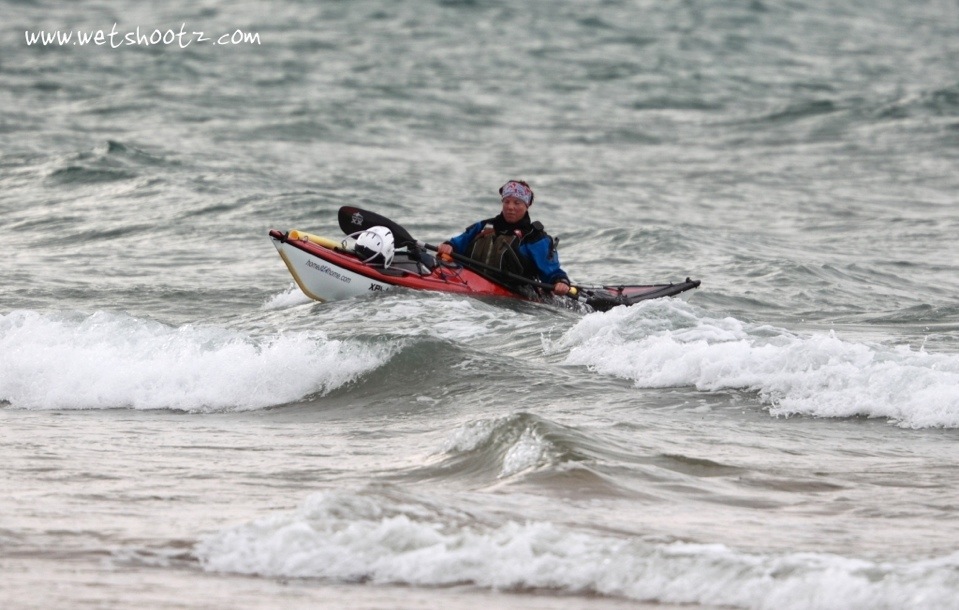 Once we knew what we wanted we started to look for such kayaks. There was one little trouble, I have used Tiderace Xplore for almost two years prior this and it became my benchmark to which I tend to compare all boats I have tried. 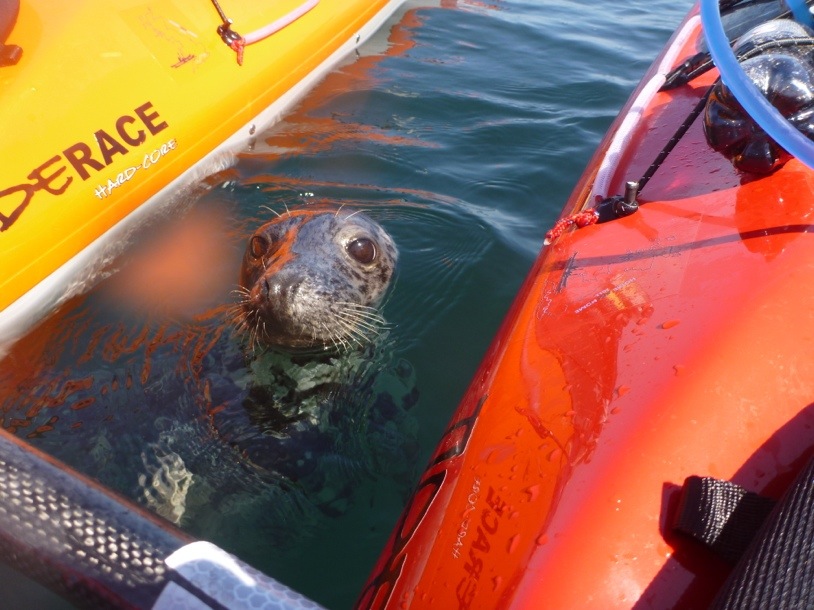 And I have to say that most of the kayaks we have tried, could not match Tiderace’s cockpit. Often it was because of the seat and backrest shape regardless of how much padding there was. The main reason why we did not look twice on most of the other kayaks, was low foredeck and nonfunctional thigh rests. Simply, there was no reason why I would chose such boat and have cramps in my legs from sitting as a frog, and there was no reason to have a best performing kayak if cockpit wouldn’t allow to use it fully.
There is not much to say about volume, numbers are clear. There are some bigger and wider boats than the Xplore but hardly any of them have the same space in hatches.
In terms of strength, I had no doubts about Tiderace kayaks. I used and abused my previous one a lot while playing between rocks and not always successfully and I have never managed to damage more than just the gelcoat.
In terms of performance, there is not much one wants from an expedition kayak, it just needs to go straight in any condition. Something what most of the seakayaks should do anyway, and Xplore is not an exception. 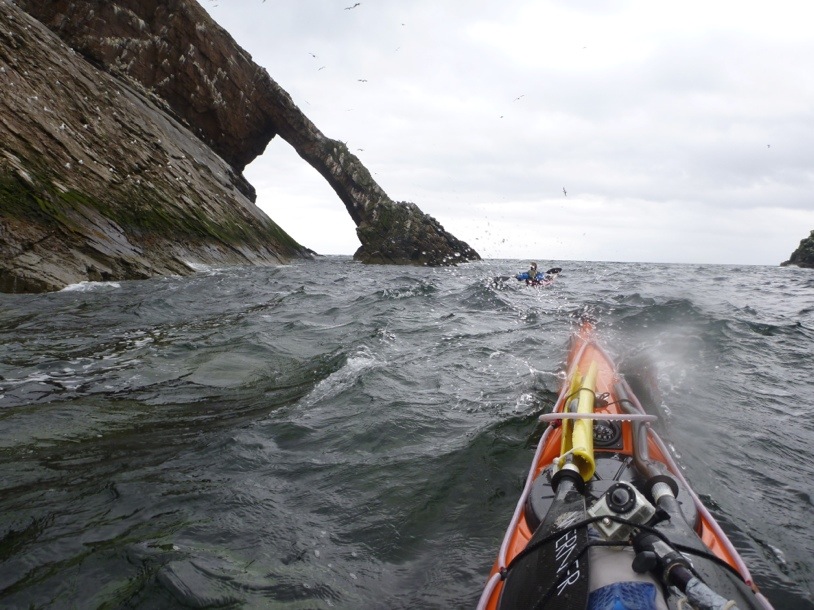 Now, being so close to the finishing line, in terms of kayak usage we have finished the first decade. And here is what we learn about them.

In terms of volume we could fit everything in what we wanted including two folding camping chairs. We actually fitted more than what was needed on such journey and left some behind at half way in.
As for comfort, no cramps in legs or feet, we could paddle up to 15 hours without getting out of them. The cockpit still allowed us to have control of the boat in any situation and as fast as needed when different leg position was taken.
The boat even when heavy loaded still seemed to be quite fast. There were no problems with stability in any conditions experienced.
The directional stability was great most of the time. If there is a side or tail wind the boat has tendencies to weathercock without the skeg, especially if the load in a boat is not spread very well. However with careful loading, the skeg can handle most of the situation and some edging is needed only occasionally.
Now, where do this ten years of usage come from? Mainly the landings. Since Natalie needed to stop more offer than I, we had to land on various places, anywhere, including between rocks. Also for the boats being heavy and us not being able to carry especially on uneven ground we often have to drag them above the water line in order to unload them. The landing were also hard there and now with boats being dumped on the beach. Although we were sure the boats were sturdy we are surprised how well they managed. If you ask Natalie how’s her boat, she would say: “Still shiny”. 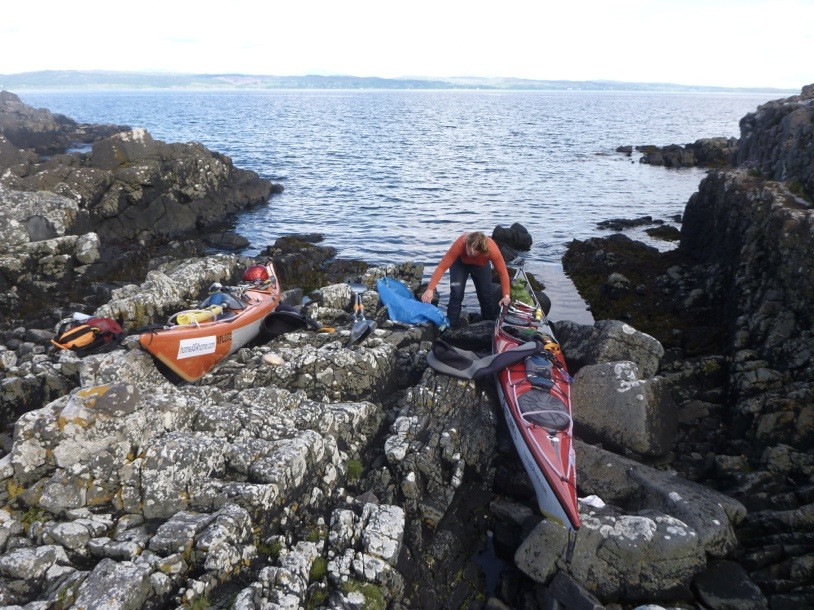 Natalie had a slightly different experience with the boats. The original idea was for us to have same type and size boats to allow similar performance during our journey. Therefore she ended up using the Xplore, too. She already paddles an Xcite. She isn’t very tall but surprisingly the cockpit of Xplore L fitted her well. The only problem was with reaching the small front day hatch and beyond, but as the weeks progressed her hands stretched and she could open and shut the foredeck hatch and use the first set of elastics.
Overall this boat felt good and she felt confident in it. Her original worries of the length of the boat were soon dismissed and she wonders what it would be like to come back to her Xcite. 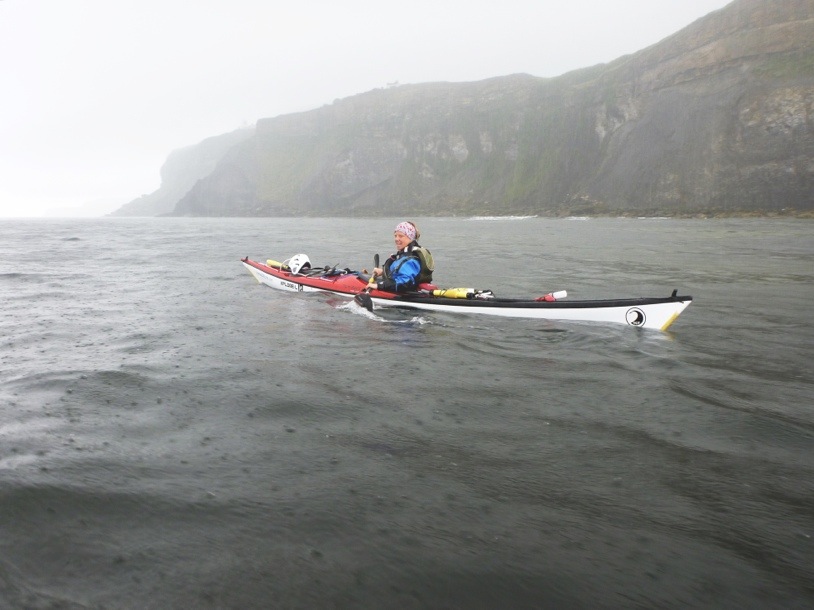 As expedition boats these boats are great and we would use them again any time. As a boat for everyday use? I used the Xplore for almost two years before and know that this boat can be used on overnighters, rock hopping, playing in surf equally.
I can’t and don’t wont to compare how fast or how small turns it can make in comparison to others. What I know is that this boat paddles well full or empty, it feels great on the water and that’s what matters.

Here are few photos of the wear and tear the boats sustained of the trip. Often they were dragged up the beaches over shingles and boulders as we were not able to carry them too far heavy loaded. We added the keel strip which absorb the worst, but as you can see the decks got only minor scratches despite the red one being dump of the beach few times. 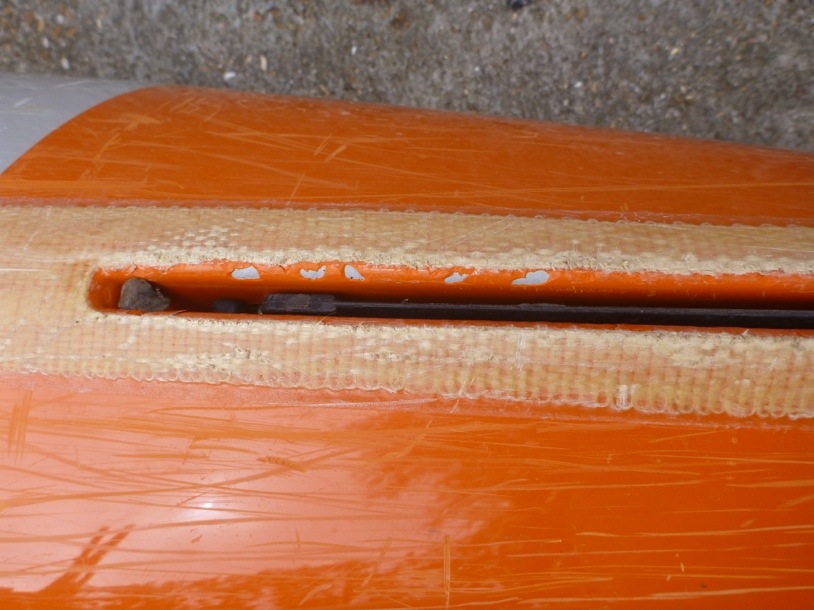 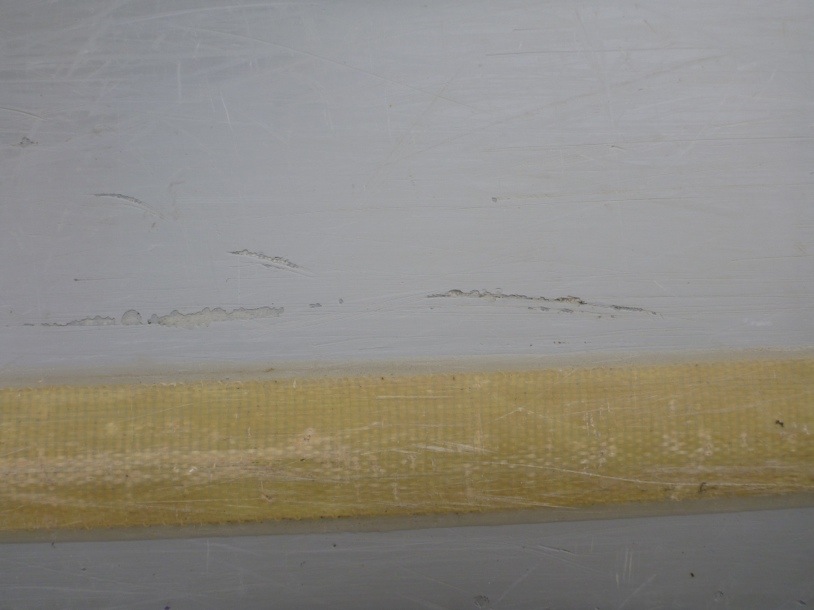 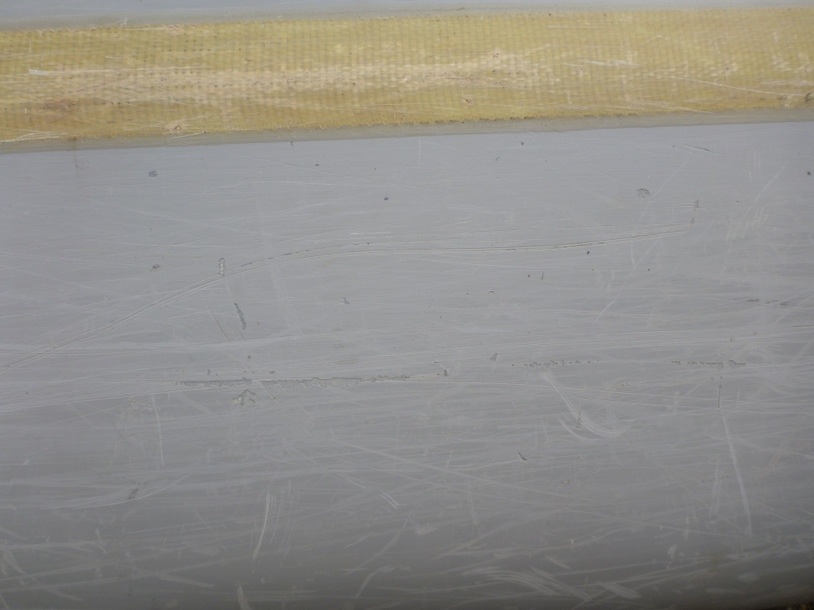 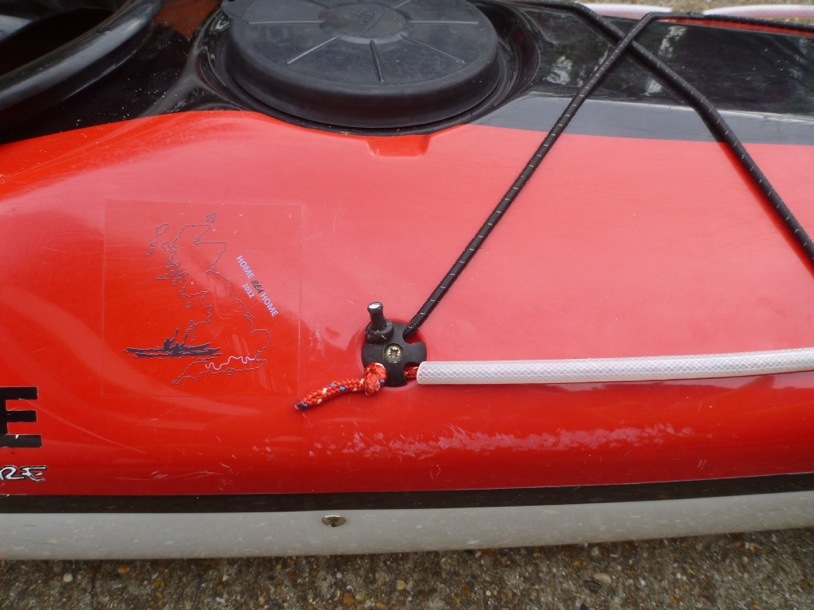 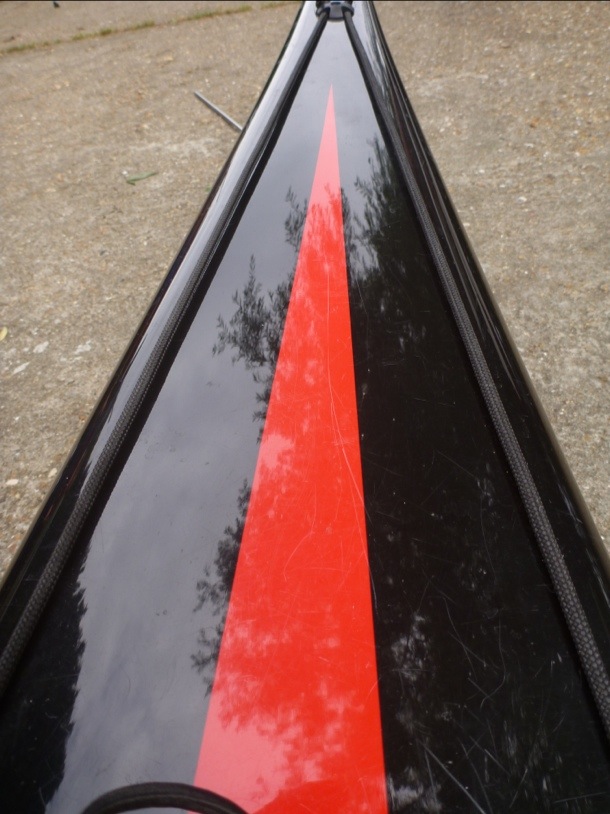 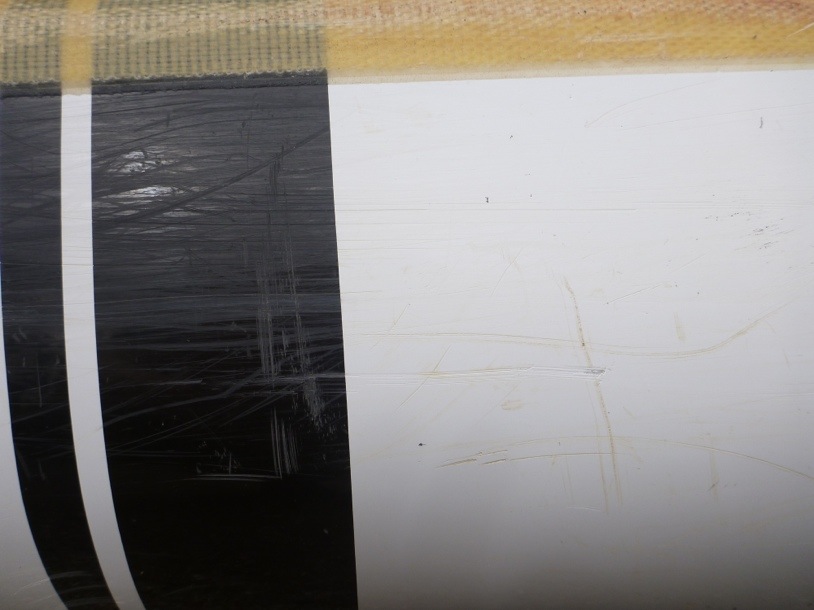 Oh yeah, I had to do some repair on my boat, the elastics holding the toggle did break after the strain of the 80kilos boat being carried by it. 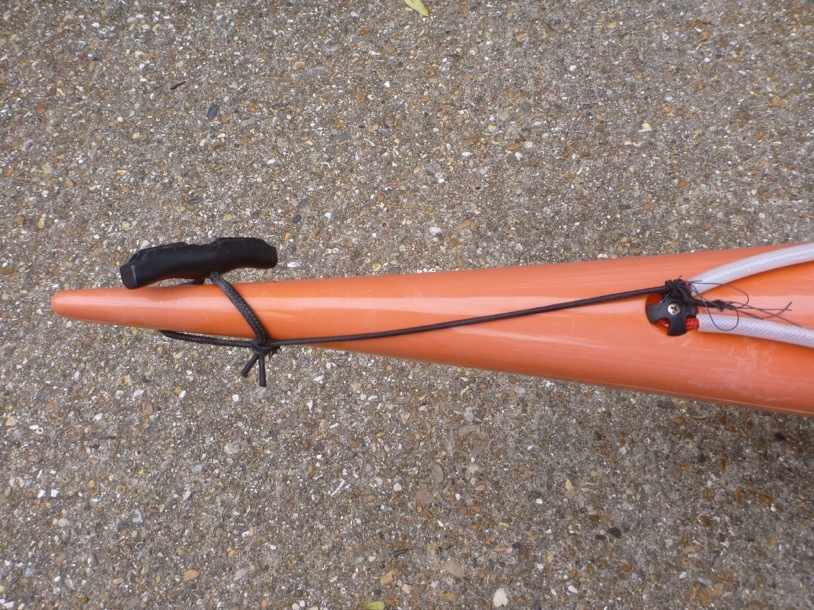